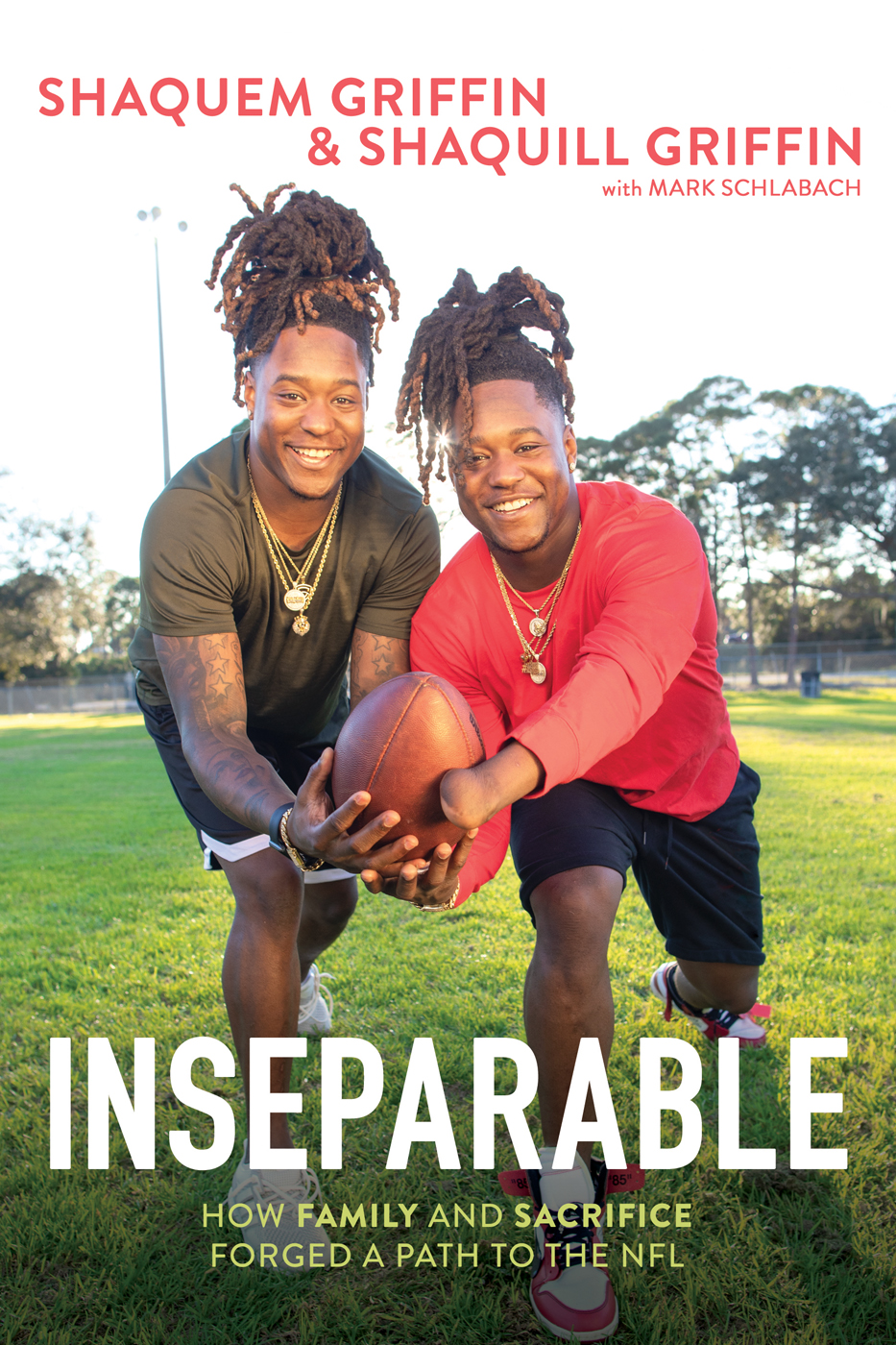 The Cover Photo Story of Inseparable by Shaquem and Shaquill Griffin

Shaquem and Shaquill Griffin, brothers and players on the Seattle Seahawks, were on 60 Minutes this week sharing their story of incredible triumph over life’s uncontrollable circumstances.  The Griffin brothers talked to 60 Minutes about their loyalty to each other as brothers and not letting any obstacle as small as being born with one hand stand in their way of greatness.  They have a dream to be the best football players in the NFL and winning to them means being the best, together as a team.

After being inspired by Ben Nemtin this morning to create a 100 Bucket List of goals, I thought it appropriate to share the Griffin’s story from my perspective of photographing them as it relates to my personal #100BucketList of goals.  When my dear friend Kristen at Harper Collins called and asked me to photograph Shaquem and Shaquill Griffin for their book cover, I was elated.  I had photographed football player and father of childhood cancer defeater,  Devon Still, for his book “Still in the Game” this past year and loved the challenge of working with these tough football guys who have huge hearts and touching stories to tell.  My job was to capture the essence of who they are as a person.  My job as a photographer was to tell their entire story in one frame that would be the face of their story, the opening line of their journey to the reader.  My job was important to capture an interesting enough and emotional enough image that the consumer would be drawn into picking up their slaved-over manuscript, be enticed to purchase, and be interested in learning what was behind the cover. I do not take my job lightly.

On January 30, 2019, Art Director for Harper Collins Christian, Kristen Andrews, called me to see my availability to photograph Seattle Seahawks players Shaquem and Shaquill Griffin.  The biggest “catch” was the shoot had to be completed in 7 days and images delivered in 8. The shoot had to be in St. Petersburg, Florida and the vision was to have the shoot on a football field. I accepted the job and went to work immediately on finding a football field we could use for the shoot.  I started big, trying Raymond James Stadium, trying the University of Tampa, and other surrounding large fields.  I wasn’t getting any return calls and it was really hard to envision what the fields would look like from a lighting perspective without being there.  I also tried large high-schools in the St. Pete / Clearwater area but found that the athletic directors couldn’t be understandably compliant with my request to shoot on a field during school hours and after school there were high-school student practices.

After not being successful over the phone to find a field, on Monday, February 4th, I decided to head to Saint Pete specifically to find a football field to photograph.  We had one day that the Griffin brothers would be in town together and we had been given one hour to make this photo should happen based on their schedules and what their agent had available. It was so tight, but I knew with a little nose-to-the-ground hard work and a few sprinkles of God-fairy-dust, anything was possible.

I drove over to St. Petersburg and after researching a bunch of public fields, I came across three that I liked specifically from a lighting perspective, but they were all locked up.  I knew I couldn’t just show up with the guys and shoot.  We had to have the fields opened.  I think it was around 4 PM on Monday, February 4th, after finding the fields that I headed to a Starbucks to make calls and contact the City of St Pete to see if someone would allow us to photograph on Thursday.  My calls were not responded to after contacting Parks and Recreation on Monday, it was just too late in the day.  Feeling deflated, but knowing that I have a way of making things happen, I decided that early Tuesday morning I would go directly to parks and recreation offices and see if anyone could help me get into the locked fields.

Tuesday mid-morning, I met a very helpful woman named Delisha at City of St. Pete Parks and Recreation who helped get the ball rolling on our field options.  Out of the three fields I found, only two could potentially be available, and only one would be available at the exact time that I needed.  So, on Tuesday afternoon, at the exact hour we would be doing Shaquem and Shaquill’s shoot, I went to the park to check out the lighting with Delisha, this new friend of mine.  Great! The field was perfect!  However, what I didn’t know was that in order to photograph on the field, I had to pull a permit that was not typically an overnight process. So many hurdles. I went back to the Parks and Recreation office and asked them if there was anyway we could turn around the paperwork needed to photograph on Thursday. There is typically at least a minimum of one week advanced notice and lots of red tape to photograph at a public park.  Was this shoot going to happen?

Wednesday I spent the day back at Parks and Recreation office confirming times with the Griffins’ agent, Kristen with Harper Collins, and praying that everything would line up perfectly. Including the sunshine! Of course in Florida, it pretty much is guaranteed to rain at 3 o’clock every day and I was scheduled to photograph the guys at 4pm.

Thursday morning comes around. At 10 o’clock I finally got the paperwork from Parks and Recreation, and at 11 o’clock they unlocked the football field for me to photograph on.  I started to get set up.  Whew.  I was setting up some lighting and waiting on my team of SKP friends to come assist me when I got a call from Kristen, the art director at Harper Collins. “So, we might not be able to use photos from this shoot for the book cover,” she says. “There’s actually a huge chance we won’t be able to use the photos. The Griffins don’t have any football gear with them and they cannot use the Seattle Seahawks jerseys because of copyright infringement.  I am wondering if we should even do the shoot?”  Deflated.  I was so deflated, and at this point exhausted! The guys were going to be there in just a few hours and after all my “making things happen” running around to find the perfect field, pull the permits, get the shoot scheduled last minute, get my photography team over from the other side of the state, and the shoot wouldn’t matter because stars didn’t align to make sure the guys have the right outfits to wear.

My response to Kristen was, “We have all these elements in place, can they just wear plain clothes? Do they have a football?” The answer was, “Yes” and my anxiety was so high. I just wanted to make this photo shoot the best it could be. A book cover is not something I take lightly because I know how important what’s on the front cover is imperative to what is on the inside. It’s kind of opposite of the saying, “It’s what’s on the inside that counts,” right!?  Well, maybe that doesn’t make sense for a book, but you get where I’m going 🙂

The shoot was still on.  The guys would bring a football and be wearing whatever, we were going to make this look football!  4 o’clock came. The Griffins arrived and I was greeted with the best and warmest bear hugs ever.  These guys are so crazy sweet!  We were all set up.  We had a generator with lights attached to flood the field, we had the SKP team, we had the guys, and we had a football!  Time to shoot.  I was breathing a sigh of relief.  We may not get the cover shot because of circumstances out of my control,  but I was going to take the best photos of these inspiring men, and we were going to have a great time in this short one-hour-window I’ve been given to make magic happen.

Want to know when I knew that God was in control of it all?  Want to know when I realized, this is not all about me, but this is about being available for God to simply show up?  I’ll tell you.  The first thing that Shaquill said to me was something along the lines of, “It’s cool that we are photographing on this field, we grew up playing football on this field as kids.  We have so many memories here.”  You guys.  I was filled with an overwhelming feeling of “this is exactly what it was supposed to be.” I didn’t know that this particular field, out of all the fields I’d researched was their hometown-football-playground!  There was so much behind the scenes that went into this shoot, and all along God was leading me to their special place.  And maybe, just maybe, the magic of this “being where we were supposed to be” feeling could be enough to make the cover shot, even without football jerseys, helmets and pads. And it was.  It was exactly what they needed.  It was exactly what God had planned for this shoot.

I know there are photographers who will read this and can relate to that feeling of, “Yup.  Got it.  That’s the shot.”  And even though I didn’t know that day if it would make the cut and be the Griffin’s Inseparable book cover photo, we did ge the shot for the day and I did my job.

#100BucketList check.  Now, seeing the photo we all worked so hard on creating on The Today Show , hear Shaquem and Shaquill share their story on 60 Minutes, and the guys who are so deserving of all the publicity, comes full-circle bucket list for me.  Full circle because what started out as a passion of mine, a Bucket List item, to photograph a best-selling book cover, turned into a project that would not only fill me to the fullest but remind me to just let go and let God in every circumstance because he knows the what the playbook looks like and where you’ll be during and at the end of the game.

Book Review Coming Soon!  Part 2 of this post will include my review of these amazingly talented humans and awesome spirited men!  Thank you for being so inspiring, Shaquem and Shaquill, keep living your dreams and in turn creating opportunities for others to also live out theirs.

And now, in regards to my Bucket List goal in relation to photographing book covers? To photograph a President for their book cover. Any President, past, present or future. So, as Ben Nemtin…says, if you know a President writing a book, please give them my number. 🙂 thanks!

Sorry, the comment form is closed at this time.