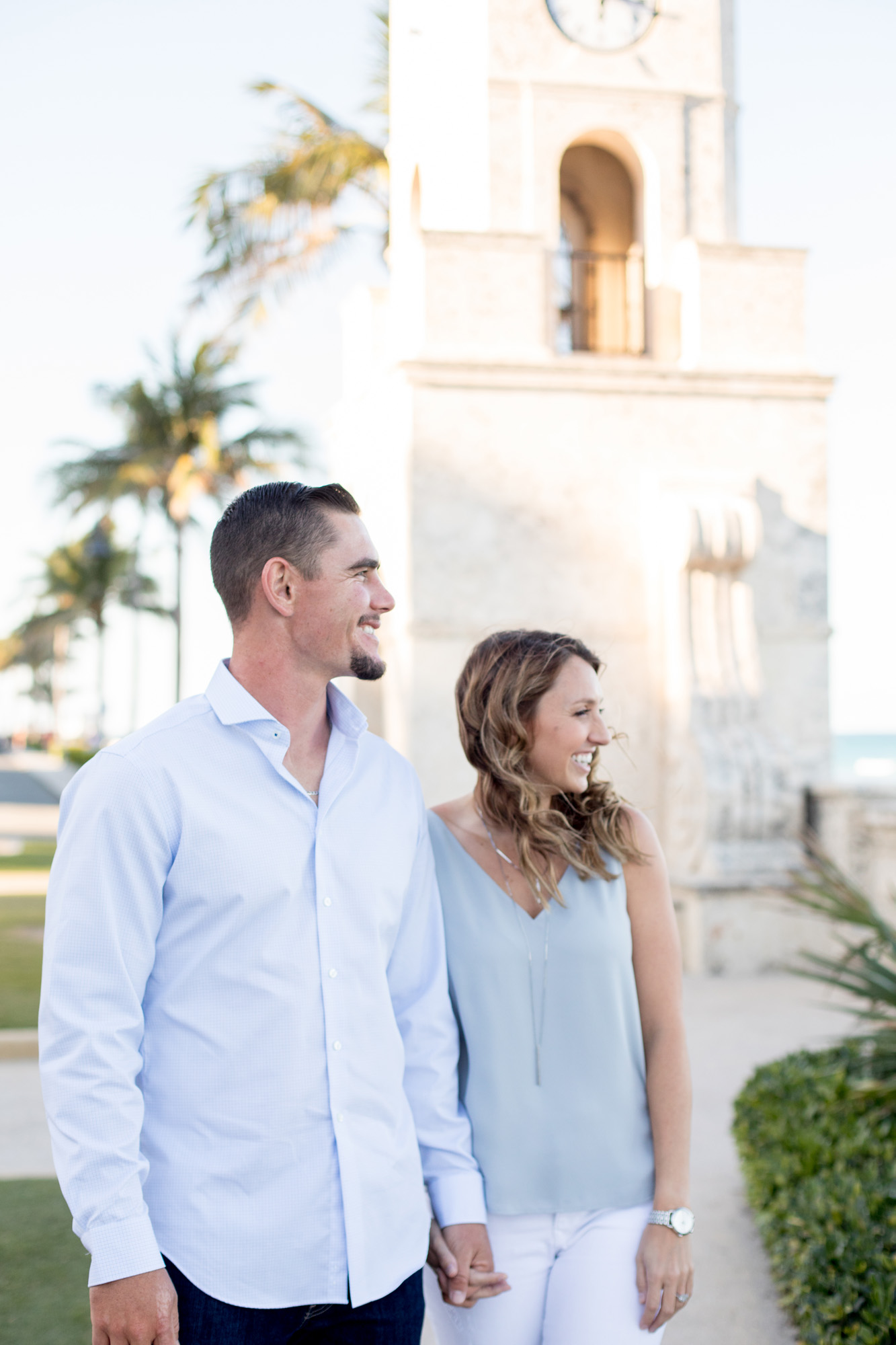 Ashley Crosby and Nick Wittgren’s Palm Beach engagement photos session was sweet, sunlit, and full of love! Baseball brought Ashley and Nick together, and Nick is now a pitcher for the Miami Marlins. We cannot wait until their Frenchman’s Reserve wedding later this year, but until then we will swoon over their adorable love story and Palm beach engagement photos!

“Nick and I met in 2011 when he played for the Cape Cod Baseball League. I was running part of the media department at the time. We didn’t officially meet until we both answered a late night “SOS – the field is under water and we need to get it dry for the playoff game tomorrow” text. He was the only player who actually showed up that night to help, and we sent him home early because he was supposed to pitch the next day. I think we were both dating other people at the time, and I was so against dating a baseball player that there was never any interest other than thinking he was a pretty cool guy.
We reconnected three years later randomly through a mutual friend—totally platonically—and spent a few months sending a million pictures of fields we were working at back and forth. I finally figured out he liked me when he bought a flight to come out and see me (I had joked that he missed out on the best parts of the Cape and Boston and was surprised he hadn’t visited his host family)—a huge leap of faith on his part because my response was “oh, you bought a ticket!”
I don’t think we’ve gone a day without talking since then. I knew we were going to get married before he came out on that flight. We had spent SO much time talking and getting to know each other that I knew he was my person, and I think he knew it, too. I remember telling my mom before he came to visit that I was going to have to marry him—he made me laugh and was very literally my perfect match.
We both wound up in Jupiter, FL a few months later, me for an internship as a strength coach training baseball players, and him for spring training, and six months later (after I finished my masters, and he finished his season) we decided to make it home permanently. I think the fact that our jobs are so closely connected made it even easier for us, because we understand what the other person was going through, and we both understand the craziness of the baseball life.
As for the engagement, we had talked about getting married for a while. Like I said, we knew before we started dating we would wind up married! We had actually gone to look at rings around Christmas time, but he told me he couldn’t afford to propose until after the next season. I was fresh out of grad school, and he was still in the minors, so that made sense — and I wasn’t planning on going anywhere.
Well, his family and my parents came into town to watch him play during spring training, which, unbeknownst to me was his way of explaining why everyone was in town for the proposal. He got everyone together on their last night here for a fancy dinner at Seasons 52 after I got out of work. He was acting SO weird on the way there that I almost asked him if he was going to propose because I couldn’t figure out why else he was acting so weird. When we walked in and I saw my brother (who is in the Navy and wasn’t supposed to be there) and his dad (who lives in California and I hadn’t met yet), I knew what was going on. He dropped down on his knee right there and asked.
The best parts about him are how much he makes me laugh and how supportive he is. You can tell from the engagement photos—we just have fun with each other, and we make each other laugh all the time.“